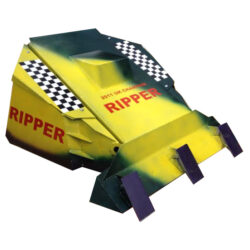 Ripper is the most successful heavyweight robot that was built by John Findlay. The first version of this machine was built in 2001 for the UK Fifth Wars, but failed to qualify, so it was rebuilt again for the Seventh Series of Robot Wars where it burst into the scene and was known for not only reaching its heat final and the Annihilator finals, but also showing the house robots who was boss turning over Refbot and nearly flipping Shunt over the top of Sir Killalot. Ripper has done very well since Robot Wars, it has famously won the 2008 and 2012 Winter Tours, and even won the 2011 UK Championships which were hosted live at the O2 in London, after finishing 4th in 2008, 3rd in 2009 and 2nd in 2010. Since Robot Wars Series 7, Ripper has been rebuilt about 5 times over the years and is now fighting in its 6th incarnation which was built in 2013 out of parts from Iron-Awe 6.